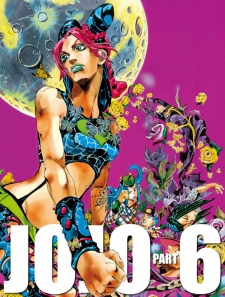 The story of Jotaro kujo's daughter, Jolyne Cujoh. She is framed for a murder and ends up in the Green Dolphin Street Prison. She is given an amulet inherited from her father, which cuts her hand and unlocks her Stand ability, Stone Free, which allows her to unravel her body into living string. The string can form a humanoid Stand within 2 meters of her body, and can extend further as string. In the prison, she soon becomes uneasy allies with fellow convicts and Stand users Hermes (Kiss) and Foofighters.
Chapters
Top genres
romance 1591comedy 1438shounen 1097shoujo 1095action 1089school life 943drama 940seinen 784fantasy 781supernatural 752adventure 485slice of life 471sci-fi 341mystery 336historical 250horror 211josei 182psychological 173sports 143tragedy 138